As part of UP’s public service mandate under RA No. 9500, the UP System will be live tweeting the Asian People’s Land Rights Tribunal currently held at the Malcolm Hall Theater.

It is a project of ANGOC’s Land Watch Asia campaign with the Office of the UP Vice President for Public Affairs, the UP Law Center, and the Oxfam GROW campaign. Follow the UP System on Twitter for more.

The usefulness of maps has been proven and established since the beginning of human history. The need for readily-accessible maps has been highlighted by the natural disasters that the Philippines experience during the last quarter of 2013 (Bohol Earthquake & Typhoon Haiyan). This is an initiative to involve more people in the disaster-risk management efforts and promote the geomatics field by doing relevant mapping.

You can contribute and help finish the map for the whole country here. 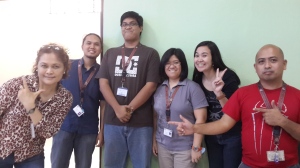 FROM THE GEOSIM FAMILY!

Geomatics in hydrological simulations: The Iligan Experience (Sarmiento; Sempio) and;

The effects of the changing landscape along the Mandulog River to lowland flood risk (Sempio; Sarmiento)

This National Conference is organized by the UP Department of Geodetic Engineering in partnership with PCIERRD.

For more information on the conference, kindly visit http://dge.upd.edu.ph/philgeos2013/

The UP Department of Geodetic Engineering, in cooperation with PCIERRD holds the Trainor’s Training on Imaging SAR Data, Processing and Applications. This two-week training is an event leading to the 2nd Philippine Geomatics Symposium on the 28-29 of November 2013. Dr. Yousif Ali Hussin of the ITC, Netherlands is the resource speaker for this training. He is being assisted by Geosim Faculty Members Mark Edwin Tupas, Rosario Ang and Czar Jakiri Sarmiento.

Since June 1991 he is Assistant Professor and later Associate Professor of Remote Sensing and GIS at the Department of Natural Resources of Faculty of Geo-Information Science and Earth Observation ITC, University of Twente, Enschede, The Netherlands. Current research interest is the application of microwave and optical satellite data in monitoring tropical deforestation and forest degradation. More specific research interest: SAR and Optical images application in forest and land cover types; RS/GIS applications to detect, monitor and model deforestation and forest degradation; RS/GIS applications to detect, monitor and model forest fire, RS/GIS applications to mangrove and other coastal forest cover types; Remotely Sensed image classification and image transformation for forest and land cover types mapping; Assessment and modeling sequestrated/emitted carbon from healthy/burnt forest using geo-information. (From the resume of Dr. Hussin)

Photojournalist David Guttenfelder was on assignment in North Korea when he first learned about the catastrophic damage that Super Typhoon Haiyan had inflicted on the Philippines.

Guttenfelder, who is the chief Asia photographer for the Associated Press news agency and a frequent National Geographic contributor, read about it on Twitter while traveling in a car from the capital city of Pyongyang to the far northeast corner of the country, near the Russian border.

“There’s 3G service in North Korea now, weirdly … [and] I started to read about the scale of the destruction,” Guttenfelder said. “I saw a picture someone had tweeted of the typhoon taken from space, which was really amazing.”

But it wasn’t until he saw another tweet, about the death toll from the typhoon, estimated to be in the thousands, that Guttenfelder knew he needed to see the devastation firsthand. “My job was to cover major events in Asia, so I knew I had to go,” Guttenfelder said.

Shortly after, Guttenfelder was on a flight from Pyongyang to China, then to Japan, then to the capital city of the Philippines, Manila. From there, he hitched a ride with a military aid aircraft to Tacloban, the city hardest hit by the typhoon.

See the photos here: Photojournalist Captures Resiliency in the Philippines After Typhoon Haiyan

They will be presenting two (2) papers:

For more information on the conference, kindly visit http://www.acrs2013.com

CEBU CITY — A graduate of the University of the Philippines (UP)-Diliman topped the Geodetic Engineer Licensure Examination on September 2013.

The Professional Regulation Commission (PRC) announced Friday that 144 out of 384 passed the examination given by the Board of Geodetic Engineering in Manila this month.

PhilGEOS 2013 is a follow-up activity to the the very 1st symposium on Geomatics in the Philippines (PhilGEOS 2012) that was held last November 2012. In its second year, PhilGEOS 2013 is again being organized by the Department of Geodetic Engineering of the University of the Philippines – Diliman. To be held in November 28-29, 2013, PhilGEOS is envisioned to be a major gathering of educators, researchers and the industry in the field of Geomatics from different parts of the country, with focus on agriculture and forestry.

PhilGEOS 2013 will be a good venue to synthesize and publicize Geomatics practice and application in agriculture and forestry in the Philippines, and more importantly, in finding ways in how to make these important sectors resilient through time.

MANILA — President Benigno Aquino III has signed into law a consolidated bill setting the Philippine Standard Time (PST) and institutionalizing the first week of the year as the “National Time Consciousness Week.”

Deputy presidential spokesperson Abigail Valte, in a press briefing on Thursday, said Aquino signed last May 15 Republic Act 10535 or “An Act to set the Philippine Standard Time in All Official Sources throughout the country, to provide funds for the installation, operation and maintenance of synchronized time devices to be displayed in key public places and to declare the first week of every year as National Time Consciousness Week.”

The new law otherwise known as The Philippine Standard Time (PST) Act of 2013 is a consolidation of Senate Bill No. 3284 and House Bill No. 164 that was passed by the Senate and the House of Representatives on February 4, 2013.

The Act mandates all national and local government offices to display Philippine Standard Time on their official time devices, including bundy clocks, in accordance with the official time provided by the Philippine Atmospheric, Geophysical and Astronomical Services Administration (PAGASA) using its network time protocol.

All of these offices shall coordinate, at least once a month, with the PAGASA to synchronize their official timepieces and devices.

The PAGASA’s Time Service Unit, in coordination with the Department of Science and Technology (DOST), shall be tasked to monitor, maintain and disseminate the PST throughout the country. The PAGASA shall operate and maintain a timekeeping system to perform these functions and shall endeavor to install and maintain sufficiently large and prominently displayed synchronized time devices in all their field stations and in key public places.

The procurement of equipment necessary for the automatic dissemination of time with global positioning system (GPS) shall be in accordance with the provisions of Republic Act No. 9184 (Government Procurement Reform Act). The DOST shall be the procurement overseer of the said equipment.

The National Telecommunications Commission (NTC) will also require the participation of all government and private television and radio stations to ensure synchronization of timekeeping devices even in the most remote parts of the country.

Owners of private television and radio stations who shall fail to calibrate and synchronize their time devices with the Philippine Standard Time during their broadcast shall, upon hearing and due proceedings, be penalized with a fine of not less than P30,000 but not more than P50,000 in the first offense. A subsequent offense will merit a revocation and cancellation of their franchises to operate.

The fine to be collected as penalty for the violation of this Act shall be deposited in the general fund of the National Treasury.

The law also institutionalizes the first week of the year as “National Time Consciousness Week.”

This Act shall take effect after 15 days from its publication in the Official Gazette or in two 2 newspapers of general circulation. (SDR/Sunnex)